Unless you’ve been living under a rock for the past couple of weeks, you’ve undoubtedly seen a slew of your friends, family, acquaintances and other social media connections tweeting/posting it: 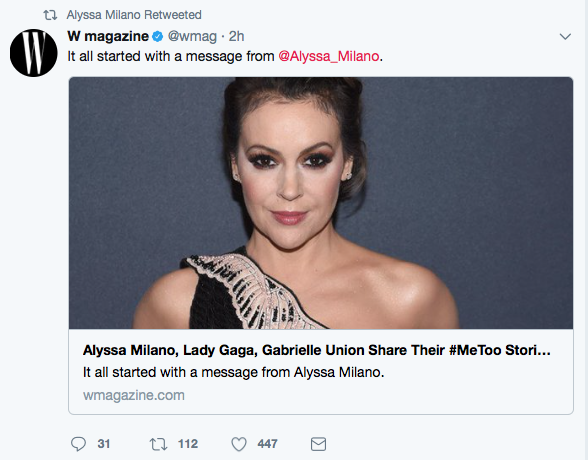 According to this article from “W” magazine,

Since the first reports of Harvey Weinstein’s alleged history of sexual assault and harassment came out more than a week ago, countless people have come forward to share their own experiences with sexual violence from people in positions of power. This weekend, to further underscore just how widespread sexual violence is in Hollywood and beyond, Alyssa Milano started a hashtag that has since gone viral.

On Sunday, Alyssa, who appeared on Charmed alongside Weinstein accuser Rose McGowan, shared her idea for the new movement on Twitter. “If you’ve been sexually harassed or assaulted write ‘me too’ as a reply to this tweet,” she wrote. “Suggested by a friend: ‘If all the women who have been sexually harassed or assaulted wrote ‘Me too.’ as a status, we might give people a sense of the magnitude of the problem.'” In the less than 24 hours since she posted the message, Alyssa’s tweet has since been retweeted more than 14,000 times and garnered more than 29,000 likes.

While more than 39,000 people have replied to the original tweet, countless more have simply tweeted “#MeToo” themselves, with or without further details about their experiences. According to Twitter, the hashtag has already been used more than 200,000 times. Among these are celebrities like Lady Gaga, Debra Messing, Evan Rachel Wood, and Hamilton star Javier Muñoz.

It turns out, the movement actually started more than 10 years ago with activist Tarana Burke — a fact Milano has shared.

According to this CNN article, a conversation with a young girl in 1996, when Burke was a youth camp director, about her abuse was “the genesis of the movement — to help young women of color who had survived sexual abuse, assault and exploitation.”

In the last few weeks, the hashtag has spread rapidly not just in the United States, but around the world.

The “W” article makes another really good point, though:

As brave as all of these people are for sharing their stories, however, it’s important to note that survivors of sexual assault and harassment should never feel pressure to name their trauma. Several Twitter users shared this sentiment using the #MeToo tag. “Reminder that if a woman didn’t post #MeToo, it doesn’t mean she wasn’t sexually assaulted or harassed. Survivors don’t owe you their story,” one wrote. “We shouldn’t have to out ourselves as survivors in order for people to grasp the magnitude of how systemic assault & harassment are. #MeToo,” another added.

I think more than the hashtag itself, the use of it has sparked some really interesting and meaningful dialogue among men and women, and what I feel are sort of “side effects.” Three of them primarily being:

2. A lot of conversations about what #metoo means, and whether women feel it’s their “right” to identify with it. I’ll get to more on that shortly.

3. This — Now a movement has started to give a voice to the countless women who can’t speak out, called #hertoo

So, naturally, I’ve asked myself, where do I fit into all of this? Like the people in many articles I’ve read and in conversations with some friends, I was hesitant to put myself out there with #metoo for a couple of reasons. The first reason was, I’ve never — thankfully — been sexually assaulted. I went through a lot of the same self-talk, self-doubt many people did when #metoo started to spread, things like “Well, practically every woman gets sexually harassed,” “My examples aren’t that bad,” “I feel like I’m just jumping on the bandwagon,” “I’m not emotionally scarred by any of it,” etc.

Then this article came out, calling forth yet another offender: Dustin Hoffman.

(Side note: I fear we’ll discover all of our favorite actors are total letches before this is over.)

I’m going to paste the first part of the article below:

This is a story I’ve told so often I’m sometimes surprised when someone I know hasn’t heard it. It begins, “Dustin Hoffman sexually harassed me when I was 17.” Then I give the details: When I was a senior in high school in New York City, interning as a production assistant on the set of the Death of a Salesman TV film, he asked me to give him a foot massage my first day on set; I did. He was openly flirtatious, he grabbed my ass, he talked about sex to me and in front of me. One morning I went to his dressing room to take his breakfast order; he looked at me and grinned, taking his time. Then he said, “I’ll have a hard-boiled egg … and a soft-boiled clitoris.” His entourage burst out laughing. I left, speechless. Then I went to the bathroom and cried.

The first several times I told this story, I left out the soft-boiled clitoris. When I finally started including it, my voice sometimes broke. But it got easier. When I spoke to a reporter recently and she told me she would have to track down people from the set to verify my account, I felt queasy. What would they say? I could only imagine them shaking their heads: “She didn’t seem too bothered by it then. She sure laughed a lot.”

Here’s the thing: this basically happened to me, the bolded part, only it was more personal to a comment about my body. I’m being intentionally vague, because I have to be. There were disciplinary actions.

What might be most surprising is, the disciplinary action wasn’t brought about because of anything I said or did. Just like her, I laughed. Unlike her, I wasn’t 17, I was a “grown woman,” and I was drinking among others. I remember feeling like “It was my fault too, we were drinking and I was being ‘friendly,’… he just had too much and said something inappropriate. Nothing that one of my male friends couldn’t have said in a bar setting!”

When I found out about the disciplinary action, I panicked. I felt guilty. After the incident, I was OK — I wasn’t even mad! I didn’t complain, I thought frantically. I’m OK, I’m fine.

But it wasn’t OK. And other witnesses decided that for me, and that was that. These witnesses were all men, by the way, and they should be applauded.

Perhaps most importantly, in part thanks to this #metoo movement, I see now that even if the incident didn’t have a strong impact on me, it easily could have had a terrible impact on others had this behavior been allowed to continue, unchecked.

Sometimes it’s not just about one of us; it’s about all of us.

As I said, I didn’t feel particularly victimized when it all first went down. I think this is in part due to a sad fact that rings true for too many of us: I’m used to it.

I’m used to guys freely making comments about my body, whether I like it or not. In high school my mom had a nickname: thunder thighs. Mine? Tankass. I’m not sure how many people actually called me that, but if one or two did, isn’t that enough?

In study hall sophomore year, a bunch of boys were snickering at the table next to me, when one of them said, “Hey girl, you’ve got some nice DSLs.”

If you don’t know what that means (I didn’t at the time), just look it up.

A guy on the football team I barely knew once told me he enjoyed watching me run around the track during practice (ugh, cross country interval day, amirite?!).

I don’t really have ill feelings about those comments either, at least not anymore. Some of them I took as weird compliments of sorts. Others, (thick legs, what?) were just puzzling. This post isn’t about calling people out… but maybe I should be asking questions like: Is it right? Is it OK?

And what does it do to our psyche? Where does our focus on ourselves go, based on the feedback we’re getting?

No matter my personal thoughts or actions, the time for silence, fear and complacency appears to be facing a shakedown.

One thought on “Me, too”