I cried myself to sleep last night.

You know why. We’re all feeling it today. It’s getting harder and harder to get out of bed, turn on the TV, look at your phone, leave the house.

There are times where I tend to project the most negative outcome because I’m afraid of it, so if I think about it, at least I’ve gone there in my head.

These days, it’s all real. All of the worst outcomes are coming true. Lately I’m afraid to stray too far from home or be in a crowd for fear that violence will break out. Last night, violence broke out to the extreme. Not in my city, this time, but somewhere. It’s not safe anywhere.

And I’m saying this as a non-minority, as a non-law enforcement officer, as a non-LGBT. I’m scared. That’s on a base level compared to what others are going through right now. But none of us is safe. For one thing, being a woman comes with its own set of concerns in this world, but these days, we’re all in danger. And I say that with respect for those who can’t take for granted that they’re not going to get pulled over for a broken tail-light and get shot. I acknowledge that fear is real, that it’s on another level. But I’m scared, too.

I’m not going to pretend like I know what we need to do, that I have the answers. That I’m not guilty of fear, of being part of the problem. I’m just another heartbroken person who’s afraid of the world we are living in, and I have to talk about it.

I wish we could just stop trying to hurt each other all the time. I don’t just mean guns and violence. Bullying. Cyber-bullying. Passive-aggressive bullshit. Mean Girls. Just STOP. Why are we doing this?

One of the major things I’m learning about being an “adult” is that day-to-day, week-to-week, month-to-month, you make a series of choices. Eat this or that, say this or that, lash out or laugh it off, say something or let it go, smile or scowl. It’s all a choice. Yes, we are driven by emotions, but we make the choice on how we act. We are responsible for our actions, no matter what we are feeling. It’s taken me far too long to realize that, but if, god willing, I live another 30-some plus years, at least I’m grasping it now.

It’s true in relationships, with the people you love, your friends, at work and each time you pass someone on the street: You make a choice in how you act, in how you react, in the energy you put forward into the world. Is it positive or negative? Believe me, it matters.

I request that you do something kind today for someone you love; do something kind for a stranger. Hold a door open. Let someone go first in line. Smile at someone on the street. Ask someone how you can help. Text someone you haven’t talked to in months and let them know you’re thinking of them. PUT SOME FUCKING LOVE OUT THERE. It’s there, but it’s being drowned out by hate. Hate is so loud. Hate is making me want to put blankets over my head and not leave my house. I fear for myself, my loved ones and people I don’t even know. I’m scared.

Just say it. We’re all scared. Hate and fear are so closely intertwined.

Last night as I wept softly, Todd held me, and after some time passed, he whispered, “We have each other.”

It’s something. It was a spark of love in the vast darkness. It gave me comfort for a few moments. And then I thought of all the families throughout this week, throughout this past gruesome month, grieving their special people, the ones they no longer have, their “each others,” and the tears started again.

Each of these victims is a person. A soul. It’s an unspeakable tragedy that these souls were taken. But they’re gone. What’s left is a fracture, a fissure, a broken heart, a broken family. These people are broken, their lives forever changed. Senseless. Shit happens, people die, but this is senseless hate.

Todd always tells me you can’t live in fear. I know. But fuck it, I’m legit scared right now. I feel like we, as a nation, as a planet, are in uncharted territory. I don’t know what the future holds for us. Civil war? World war? Nuclear war? Zombie apocalypse, which actually seems like one of the least scary options anymore. I’ve spent less time fretting over the upcoming presidential election (although, believe me, YIKES) and more time just mourning the end of Obama’s presidency. And fearing for the future of the world.

Look at these top stories on my Google news feed, right now: 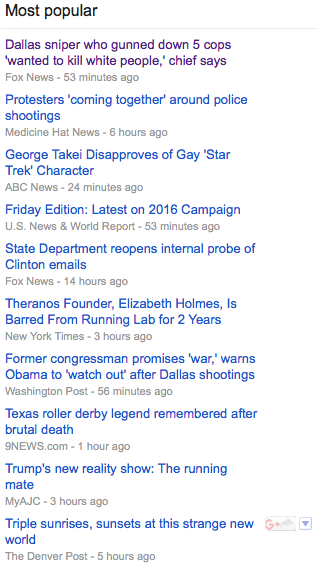 I’m so sick to my stomach.

I’m going to stop now. Like I said, I don’t have some great advice or insight. I just had to get some things off my chest. This is my blog, my journal, my sounding board. And my heart hurts.

Stop this train; I want off.

One thought on “Stop this train…”