I’ve referenced the fact that I was once married and owned a condo. While this time wasn’t the best of my life, I certainly felt more financially stable, and perhaps more “adult.” I owned property! My ex and I were part of a condo association. We got a tax credit that helped to pay off my car at the time. We paid property tax!

Then, we split up and this wonderful “investment” became a serious thorn in our side. He moved out of state and I continued to live there, but I couldn’t afford to buy him out or even pay the mortgage myself, so it had to go on the market.

Plus, I didn’t need or want to stay there with the memories and all.

I met with our realtor to go over some things before our first open house. She pointed out things I might want to feature, such as a built-in wine rack above the fridge that at the time was completely blocked by crap and not being used.

“I’d take down the dart board,” Michelle said a little tooooooo quickly when I told her about fixing things up for the open house. I side eyed her.

Why she thought THIS, chipped paint and all, didn’t scream “class!” is beyond me… but some people have no taste.

Not visible in photo: Little holes in the wall from where I missed- by a lot. 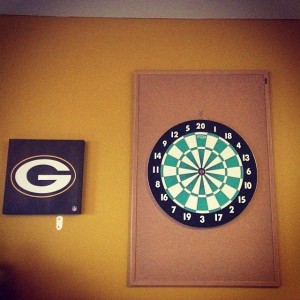 When my ex and I split up and he moved out, I had made some changes to make the place more “my own.” When Todd and I started seeing each other, he brought over the dart board because it was just sitting around unused at his place, and we could spend cold Friday nights throwing darts and drinking beers at my place instead of going to a bar.

Alas, it had to go. I fixed up the patchy paint areas and Todd, who is a Mr. Fix-It (really, that’s his job), took care of a couple things to get it ready for sale. On the night before my very first showing, which happened to be Valentine’s Day, he brought over some roses.

“Oh my gosh- thank you, that’s so sweet!” I exclaimed.

“They’re not for you — they’re for the showing,” he replied.

He was kidding. Sort of.

Long story short, it took about 4-5 months to sell it, and my ex and I took a loss, but the condo was a liability at that point. We just needed to unload it, so we could really move on.

And then there I was, for the first time ever in my life, about to have my very own apartment. In college, I had roommates. Post-college, I couldn’t afford to live on my own and rented a room in a house owned by a crazy woman (but she had a pool), and then moved in with some other girls. From there I met my ex and moved in with him.

I was very excited to have my own place and decorate it just how I wanted, and I pretty much blew the little bit I got from our deposit from the condo sale on crap at Target. 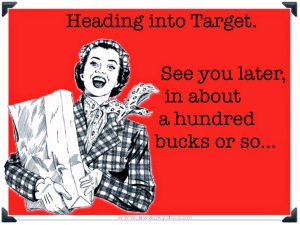 I really enjoyed that place, but as Todd and I grew closer and spent more and more time together, it was like he was throwing money away by renting his own place.

I’d stay there, too… like once every 3 months. There was nothing wrong with his place. It was small and the perfect bachelor pad of sorts, but as most women do, I just liked my place better. He had very little on the walls, and when I asked him about it one day, about perhaps getting a couple things to reflect his personality, which is pretty amazing, his response was as follows:

“If I had decor that reflected who I am… It would pretty much be brown and hairy.”

Also previously referenced, Todd and I ended up moving to a different part of town. Some say it’s up and coming. I never thought I’d be able to leave the neighborhood I lived in for 7 years prior, but really, I’m liking it so far. One of the primary reasons we chose the area is that you get a lot more for your money. We’re currently renting a condo that has 2 bedrooms, 1.5 baths and a den. There have been some issues with it, but we’ve managed to work them out with the rental company, and I like what we’ve done with the place and what we may do down the road.

We also live very close to some “real” adult friends — Carly and Brant — who actually bought a house out there. And they have a pool. So that was pretty cool this summer. We live by a really awesome park, too, so Carly and I take walks a lot of mornings with her adorable dog.

So this weekend, we’re having a housewarming party. I feel pretty ready for it, but last night I was having one of my classic freak outs of sorts about making sure we have it spic and span (wow, where did THAT come from, no one says that anymore!) and classy af. Which is a challenge given that the paint job done before we moved in is shitty at best, I have a cat, there’s a mysterious smell in the basement we’ve been trying to address and we seem to have an infestation of lady bugs. 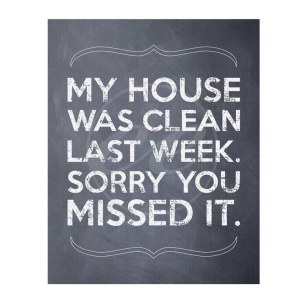 And part of me is wondering if we should even be having a housewarming… it’s not like we bought this place! Is it super lame to be doing this in our 30s?! Whatever. We can call it a “football party,” really, because that’s the focus. We have 2 TVs!

Maybe one day we’ll buy a house, too — but stay tuned for a future entry about my bank and the pressure for me to start a savings account — and that idea is kind of laughable right now.

One thought on “Adult abode”